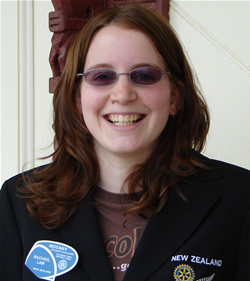 I started out on a bad step you could say, arriving at the airport late (our flight had been delayed) followed by losing my luggage. But after that first day, I've never stopped enjoying myself, going from fun times to great times to brilliant times!

I attended College Royal Marie Therese, and was put into the 6th form or last year of school. Classes were hard at first with the language barrier but they soon got better and I enjoyed being there.

Every month the rotary would organise a free trip for the district, usually a half day affair but sometimes it took an entire Saturday to get through it all. We visited Brussels, Bruges, Bastogne, Antwerp and some very interesting less known places, for example the WW2 fort in Vise near the border of Germany and the Netherlands.

In March I was lucky enough to go to Ireland, for Saint Patrick’s Day with two close friends. We stayed just out of Dublin and explored the city everyday, even in the rain! After that I can say that I love the city and the country!

At Easter my first host family took me to France, and I also changed families for the first time. This was very hard as I got along so well with my first family.
In the summer holidays I travelled to the South of France with my first host family and stayed there a week with them. I swam in the Mediterranean Sea, experienced gorgeous weather (30degrees + at 8am) with resulted in the best tan of my life. After this memorable trip I grudgingly admitted that the south of France was nearly as beautiful as New Zealand, but not quite.
I also travelled throughout Belgium a lot with friends both Belge and Exchange student.
The second highlight of my summer break however would have to be the 4day music festival I went to in early July with my 3 best friends. We saw great bands and artists on the two stages, such as Mika, Lennny Kravitz, Kaiser Chiefs, the Raconteurs, the Kooks, John Butler Trio, MGMT, The Hives, Kings of Leon, Ben Harper, Neil Young, the Verve, The Chemical Brothers and R.E.M.
For my birthday present, my 3 best friends organised a surprise trip for me, they paid for everything got all the permission from rotary and my host/natural parents, and then took me to Paris for 3days! Those 3 days were some of the best spent days of my exchange, we visited places like the Eiffel Tower, the Louvre, the Moulin Rouge and we experienced Paris in every way that made it in my mind one of the most beautiful cities in all Europe.
In October, the rotary organised trip was to the Opera. Our clubs paid for us, and we got to dress up in lovely dresses and have a night at the Opera. We watched Helen of Troy. It was in Italian, but with subtitles in French and Flemish. It was without a doubt an amazing experience that I won't ever forget.
A mere month later, the rotary club of Franco champs/Spa had their annually organised event, a day for the disabled kids in the region to get free rides around the Formula One race course, and for the Rotarians to get to drive their Porsches and jags and other such fast cars around the track at ridiculous speeds. I washed some dishes and so got 3 free rides. The weather was not our friend that day however, and so the drivers could only get up to 250kph, instead of the norm 300kph. Regardless of this fact, I still became very aware of the meaning behind the phrase 'flying by the seat of your pants'.
My last big highlight of the year (there are too many to list I could write up to 10 pages given half the chance) was St Nicholas at school. Every year the leavers get to acquire a lab coat, draw something special to them on the back (for example favourite Disney character. I did the Dog from Footrot Flats, and then had to explain about 500times why I had put that there) and then proceed to get all their friends to write a small (or large) note on it. Then on the day of St Nic we all came to school and wore the coats and had a performance for the younger years, with funny awards like best 3rd former or best female teacher, and we had a dance off and transvestites, all in all a great day and a great cultural experience :)
My year in Belgium was a year of my life that I will never forget, and will most likely continue to be the best of my life for many years to come. A great experience and I'd do it again in a flash. I cannot thank rotary enough for this life changing experience.